How to do a Taekwondo promotion test objectively. 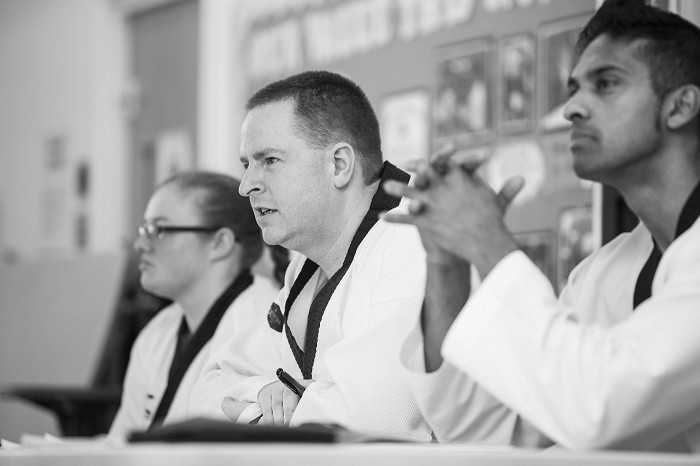 Having spoken to plenty of masters on this topic recently, grading scoring is generally done in one of two ways:

Both of these ideas really hinge on just a feeling from the examiner and are therefore subject to individual preferences and moods, and that doesn’t seem like the right way to do it.

How we assessed candidates before gradings

Over the past five years at Stevenage Taekwondo we’ve done these aspects the same way. In between two consecutive promotion tests there are approximately 20 sessions available. We require a minimum attendance of 16 sessions (for coloured belts, it obvious increases proportionally for Dan gradings).

Out of those 20 sessions, we would allow for a handful as fun sessions just after the previous grading — to alleviate the pressure of the previous preparation cycle. Then we allow a handful of sessions where we focus on teaching the new poomsae, techniques, etc for the student’s next grading — focusing primarily on memory over accuracy or technical ability. Each session pushes a student no further than six moves from the point they knew up to.

After all the group at least remembers the poomsae, the remaining weeks are focused on polishing techniques so that in the two weeks before a test we can assess students in individual mock tests and ensure they are hitting 70% minimum in each section. Our pass mark is 60% in line with Kukkiwon, but we allow for a drop on the day due to nerves so require 70%+ in the assessment.

However this leads to either inconsistent assessment results from our master instructors, or often parents complaining that their child knows the pattern, practises at home and really deserves just one more assessment… Initially we were swayed by this, but we’ve been strict in this over the past year, in saying “no, they’ve been assessed by a qualified master instructor and they just aren’t ready”. To be fair our adult students and most of the children’s parents just accept it and support us, but there’s always one or two… There must be a better way!?

How can we do better?

We’re changing the way we score certain categories within our grading syllabus (our syllabus is available online for all to see) to be more objective.

For poomsae we are marking in a similar way to the way World Taekwondo poomsae competition is scored, but using tweaked scoring values and criteria. I came up with these values used by having my assistant master instructors scoring candidates at our last test while I tried various values and seeing which came closest to our old method scores.

So going forward we will score poomsae like this — each candidate starts with 80 marks. For each major mistake they lose five marks. Think of major mistakes as the word “incorrect”, such as a completely incorrect move, the incorrect stance, stepping direction was wrong, missed movement, missed shout or shouted on the wrong movement, ambiguous target, etc.

For each minor mistake they lose one mark. Think of minor mistakes as the word “inaccurate” as opposed to entirely incorrect, such as the fist/knifehand not correctly formed, the stance was slightly inaccurate (maybe a foot was twisted too much or not enough, but it was obviously the correct stance), the starting position or movement shape was inaccurate, etc.

Then we add up to 10 bonus marks for speed/power — were the moves just all soft/slow, were they hard but using grunt-style power or did the candidate correctly use acceleration to deliver power. We add another up to ten marks for spirit — including did they look/seem confident and powerful, were their eyes looking in the right place, was their dobok neat and tidy, did they shout with confidence, demonstrate proper etiquette, etc.

This gives a maximum of 100, the pass mark on the day is still 60, pre-grading assessment must still hit 70.

This also means that we will adjust the training method. Instead of the previous “memory first, then accuracy” ethos, we now teach six moves at a time but the candidate won’t move past them until they are completely accurate. This means we don’t need a separate polishing phase and will reduce the stereotypical “little Johnny knows the pattern, why can’t he test?”. Our answer can simply be “he still doesn’t know all of the poomsae because his accuracy level hasn’t let us get past the early part” or “in our last assessment he only got a score of 55 marks, see….”

What else can we apply objective scoring to?

The other area we are changing how we score is one step sparring and self defence. In line with the Kukkiwon Master Instructor Course in 2016, we now do one step sparring with both candidates starting from a left hand forward sparring stance and executing a single long stance stepping punch to the head with the right hand only. Self defence is done from a relaxed stance with the attacker grabbing one of both wrists, a lapel, shoulder or bear hug. Both sections include locks/throws/takedowns/submissions as per the current Kukkiwon syllabus.

The way we will score this is each judge will watch one candidate perform exactly 8 sets of defence (another judge will watch their patner). Each set can have three marks for effectiveness — basically “would it work?” (not upto three marks, but either get the three marks or get zero), three marks for safety — “did they block/evade in time, step in dangerously?” and three marks for difficulty — “was it of an appropriate skill level for their grade, not too simple/basic”. If they get all nine marks in one set, we add a bonus mark. This gives them eight sets of potentially 3+3+3+1=10, so 80. They then get upto 10 marks for including correct locks, throws, groundwork and submissions (again, in line with the current Kukkiwon Taekwondo syllabus). And upto 10 marks for spirit — eye direction, breathing, how effective/confident they looked.

We’re still considering how this same style of objective grading can work for other areas such as free sparring and destruction; but we’re pleased with the trials done so far in this new marking style and hope sharing it helps other clubs to either be more accuracy focused and objective, or at least to think through in more detail how they score grading candidates. I’d love to hear your thoughts on this way of testing candidates, or how you do it if different from the old “just give a mark” or this objective way.